PLEASE SEND IN ANY UPDATES to This email address is being protected from spambots. You need JavaScript enabled to view it.

Now including news items and appeals for dancers and musicians

Musicians wanted by Anniemation
Any or all of: Melodeon player, accordion player, violinist wanted by AnnieMation - a North West Morris side based in Colchester, Essex.  We practise on a Sunday - 11-00am until 1-00pm and have regular dance outs and dance weekends away.  Anyone interested please contact Ian on 07719846968  or email This email address is being protected from spambots. You need JavaScript enabled to view it. 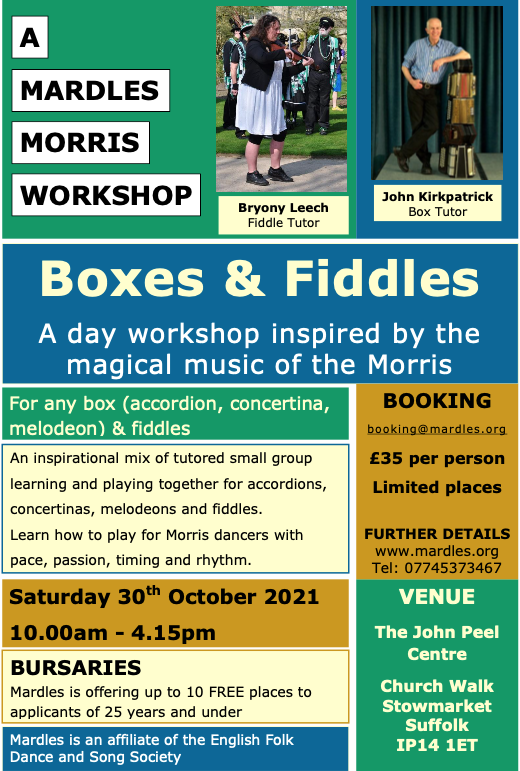 To book a place at this workshop, contact  This email address is being protected from spambots. You need JavaScript enabled to view it.

There can be few Morris dancers who have not heard of John Kirkpatrick; but just in case, these notes may ring a few bells. John is our tutor for the “boxes” workshop.

His contribution to folk music was nationally recognised in the 2021 New Year Honours when he was appointed a Member of the Order of the British Empire (MBE). John’s particular role in popularising and promoting the music of the Morris has been a central part of this contribution and dates back to, at least, 1959 when he joined Hammersmith Morris Men.

In 1973 he moved to Shropshire and founded the Border Morris side Shropshire Bedlams and his then wife, Sue Harris, formed Martha Roden’s Tuppenny Dish. Both sides devised their own individual dances, based on traditional forms and often danced alongside each other; they are now approaching their 50th year and John continues to play for them.

John has recorded more than 40 albums including Morris On and Plain Capers (with Martin Carthy and others). His music has a strong connection with Cotswold Morris in particular but his recordings include a huge range of other traditional English tunes as well as original music, particularly his arrangements for the National Theatre’s production of Lark Rise to Candleford.

John has played and recorded with musicians such as Ashley Hutchings, Martin Carthy, Sue Harris, John Tams, Richard Thompson and in bands such as Steeleye Span, Brass Monkey and the Albion Band. He has produced one of the only teaching DVDs for English (D/G) melodeon as well as his 2003 book of traditional tunes, English Choice, with two accompanying CDs. He tours regularly and has often played in East Anglia.

Bryony plays the fiddle for Cotswold Morris side Mad Jacks Morris from Hastings. They were formed in 1976 and have a men’s and women’s side and are an important part of the big Jack in the Green Festival in Hastings.

She is a teacher and came to prominence when she played the fiddle for Rhys and Owain Boorman, identical twins, who won the John Gasson double jig competition at Sidmouth Folk Festival in August 2015; all three are members of Mad Jacks Morris.

Bryony said: “Although I have been to Sidmouth before, I’ve not played in the jig competition, and it was quite an experience. I certainly hadn’t expected to win three medals!”

“Rhys, who choreographed the double jig, said: “Sidmouth is really big in the folk world, and it was fantastic to win the double jig competition. We are really grateful to Bryony for her superb fiddle playing for us.”1

Bryony Leech is continuing a folk legacy - her father Keith Leech is the founder of the Jack in the Green Festival and still dances with Mad Jacks. In the past he has taken part in the Sidmouth jig competition himself. 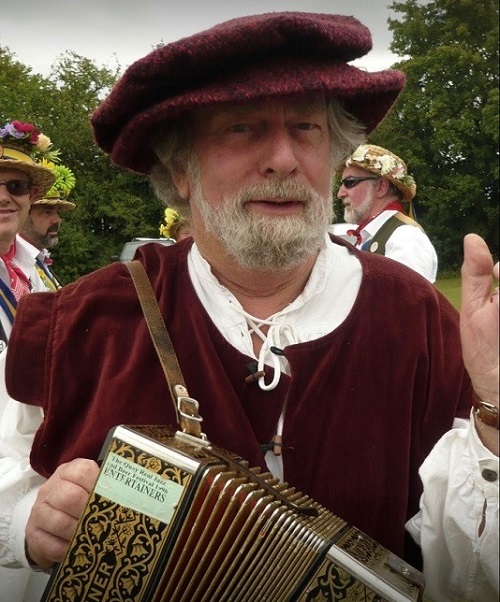 Neville Parry, Squire of The Morris Men of Little Egypt has sent the following tribute to Frederick Sanders.

“It is with immense sadness and grief that we announce the passing of our dear friend and Founder of the Morris Men of Little Egypt, Frederick Sanders.  Frederick passed away at home on Monday 24th May surrounded by his beloved family.

Frederick had Morris blood running through his veins – he founded The Belchamp Morris Men in the 1970`s whilst living in Belchamp St Paul. After he and the family moved to Glemsford in 1987 a chance encounter led to the vicar of St Mary`s church asking Frederick to form a Morris side for a “one-off” performance at the Church fete in 1988. 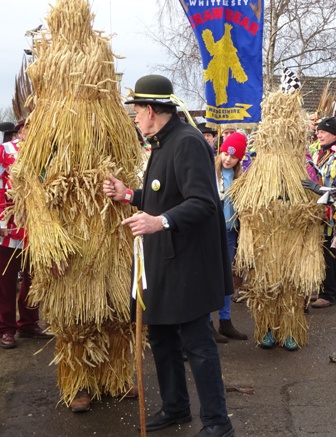 Morris and Covid-19; Part 2 Morris Dancing for the Socially Isolated

Two weeks ago, on the 16th March, when I wrote the first article, in what now is becoming a series, no-one expected that almost immediately all Morris practices, pub nights, day's of dance and festivals would be cancelled until further notice but that is what has happened.  Even more astonishingly most of us are now required to remain in our own homes as part of the social (physical) distancing strategy.  For those of us who are feeling an urge to get back to dancing here is a way of performing the Upton on Seven Stick Dance completely in compliance with social distancing; kindly provided by Keith Graham of Colchester Morris Men.

Following the Government announcement on 16th March the Joint Morris Organisations issued a statement which confirmed that the JMO National Day of Dance planned for 18th April 2020 in Liverpool has been postponed until April 2021 on a date to be decided.

Similarly, Daniel Fox, Squire of Thaxted Morris Men announced  "the not-unexpected decision to cancel this year's Thaxted Morris Weekend due to be held on May 29 to 31.  It is the first cancellation since 1939". 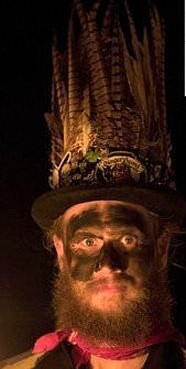 Read more: “Is practice still on tonight – are you going?” - Morris and Covid-19

You know how it is, you're doing the ironing or cooking and you have the radio on in the background and suddenly your ears prick-up as you become aware of something familiar or interesting.  Well, there I was preparing an early supper when I heard Jon Boden's voice talking to me from the radio.  He'd put together a great little programme about the poet John Clare, the "Northamptonshire peasant poet".  He's one of my favourite poets and I even have an 1820 copy of his first book "Poems Descriptive of Rural Life and Scenery" which I inherited from my Mum.  So, Jon Boden immediately got my full attention, especially as the programme was celebrating the 200th anniversary of the publication of that book. 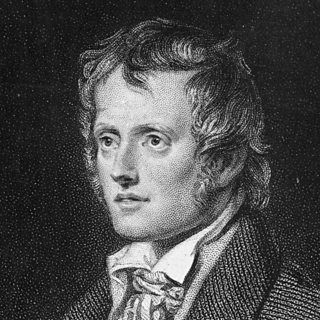 The programme was on Radio 4 on Sunday 12th January at 4.30pm and can still be found on BBC Sounds but only until 10th February 2020.  Sadly, it doesn't seem possible to download the programme.  Boden celebrates John Clare's tune and song collecting, some of which Clare learned from the gypsy, Wisdom Smith, who he met around the Cambridgeshire village of Helpston, near Peterborough.  Clare was described as a "decent scraper" and learned to play his fiddle tunes from visiting gypsy camps.  He was one of the earliest folk song collectors and amassed a collection of 263 tunes and songs, some from the gypsys and others from his father's collection of over 100 ballads which he sang at local pubs.

The reason for including all this in a piece in Mardles Morris On! is that Morris does get a mention.  One of the contributors to the programme says that Helpston had its own "Morris dance, as Clare calls it", but then says "which we would now call a Mummer's Play".  Disappointingly, from my perspective, no more detail is provided in the programme after this tempting mention but it's further evidence of an East Anglian Morris tradition of some kind and an interesting glimpse into England at the time of the enclosures.

Have a listen to the programme yourself if you get the chance, and you'll also hear Jon Boden singing the John Clare version of Bushes and Briars.