Back in early 2016 Deirdre Murphy persuaded a group of like-minded musician friends to join us in setting up Strummers - with music with a social conscience as its tagline - as we felt there was a demand for a left-leaning club on the local folk scene. After two years, we made the tough decision to leave the club to devote our energies to our band Red Velvet, confident that we had left it in very capable hands.

It was therefore a great pleasure for me to go along to Strummers’ 3rd Birthday gig on 26th January, to catch up with old friends and - of course - to listen to some great music. The line-up for the evening was very strong: singer-songwriter Tony Phillips, exciting folk duo Causton and Walker and chocolate-voiced Norwich-based songster Marina Florance.

“For me life is a craft, music is a craft. So if I’m knitting, that’s got just as much influence and inspiration as my music, as has nature, as has colour, as have oceans or birds... or drawing. Everything’s all connected, and knitting is something that makes me calm. I love its regularity and rhythm ... the form, the shape, the contrast, the colour, and those are all things I talk about in music. I feel that my accordion could be a garment really, it’s something I wear; it’s part of me.” .

These are the words of Karen Tweed, virtuoso accordionist and Renaissance woman, spoken to me in an interview for my show on Cambridge 105 Radio a few days before her concert at Cambridge Folk Club on 22nd February.

I went along to the concert having never seen Karen perform live before, not even in previous guises, as a member of The Poozies or with Roger Wilson or Kathryn Tickell, who gave Karen her first break in folk music by inviting her to tour Sweden.

Northamptonshire born, like myself, now residing in the Orkneys, the much travelled Karen took us off on a musical journey. Starting the evening by playing her childhood instrument the melodica (“Everyone should play one”), she went on to entertain us with the story of the variable names of her mum from County Kerry and dad from Willesden, before performing the beautiful “Miss Hanoria McNamara of Ballybunion”, inspired by her mum.

The evening proceeded with Karen alternating between the role of raconteur and that of consummate musician, eyes closed, smiling serenely, delighting us with beautiful melodies and subtle syncopation.

My favourite piece in the first half was My Dear Julia, inspired by a photograph of John Herschel by pioneering 19th-century photographer Julia Margaret Cameron; the piece is Karen’s imaginings in music of what Herschel’s letters to Julia might have contained.

The second half tended more towards the ebbs and flows of Karen’s music than to her storytelling, and included an ambitious 20-minute set of tunes that even took a dip into Moon River, with the audience gently singing along, before continuing on its musical journey.

A Weekend of Women and Wonder

I am always surprised when people talk about Suffolk as a sleepy quiet place.  My own experience is that on any given night I have to choose between events to go to and wonderful experiences to have.  I personally lean towards folk and acoustic music, but I try as many different genres as I can and have noticed that when I chat to people at folk clubs, they are just as open.  This past weekend I have loved the variety on offer and have been to two events I feel inspired to write about.

Friday 8th March 2019 marked International Women’s Day and there were a number of events going on around Suffolk to mark the occasion.  I took myself off to the John Peel Centre in Stowmarket where the Soapbox was hosting an evening of performance, poetry and debate.

Read more: A Weekend of Women and Wonder

Phil had to overcome both the elements and a major road closure to perform at the Canopy Theatre in Hungate Church, Beccles on 8th February.

A dismal, cold and frosty night on the East coast was forgotten for a few hours in the company of the wonderful Edwina Hayes, who had driven all the way down from the East Riding of Yorkshire to the most easterly town of the UK to entertain fans old and new.

Concentrating on songs from her two independently released solo albums “Pour Me A Drink” and “Good Things Happen Over Coffee” plus many from the album she is currently recording, Edwina delivered soaring vocals underpinned by unfussy but effective backing from her trusty Takamine acoustic guitar. 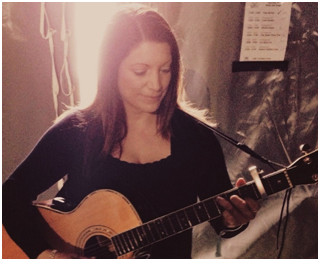