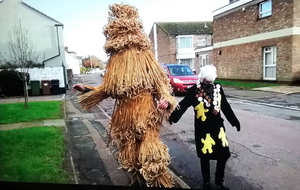 The Bear makes its way down Gracious Street (photo by Christine Kell)How to run a festival that is based around a central figure dressed in five stone of straw that usually depends upon crowding several thousand people into a small Fenland town? That was the dilemma facing the Straw Bear organisers as it became clear that live events were not going to be possible in January. Over the summer, we began an 8-month planning process that became Straw Bear Online.

Two things we agreed very early on were that we would try to run our virtual festival in a way that followed the format of the live event as closely as we could, and that we would put a Bear on the streets of Whittlesey in some form. 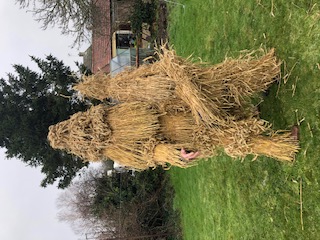 The two Bears grandfather & grandson Paul Cornell & Noah Randall (photo by Megan Randall)The making of the Bear was one of the first things to be finished, mainly by Brian and Christine Kell and Ady Bull, using Brian’s garage as a workshop. Paul Cornell had already offered to be the “isolation Bear”, and a lot of planning was put into a route, risk assessment and whether a small number of the Straw Bearers would be able serve as a distanced audience along the way. However, as December came around and with Tier 4 and lockdown looming, three generations of the Cornell/Randall family pulled out all the stops to take the Bear out on Christmas Eve and film some poignant footage that had several of our YouTube viewers in tears as it formed the finale of the “Processions through the ages” video

We were also keen to include some exclusive content that people coming to visit for the weekend might not ordinarily see. “How to build a Bear” and interviews with some of the many people who have driven the Bear over the years were well received, without taking away the mystery of the festival’s central figure. As Brian said: “The driver is not the beast. All the driver does is give the Bear mobility. It’s an entity all of its own.”

We were also able to bring people together in real time with a selection of Zoom events to choose from. Over 400 people enjoyed two live music sessions led by members of White Rose Morris and the Straw Bearers, who are often found in the Letter B until the small hours of Sunday morning, an at-home ceilidh with top musicians Doug Eunson and Sarah Matthews, with caller Martyn Harvey, and a talk on “40 years of straw and string”.

Putting on Straw Bear Online was a huge amount of hard work, alongside our everyday responsibilities of work and home schooling. I should particularly mention Rebecca Kell at this point, who built an entirely new website from scratch and did almost all of the video editing. 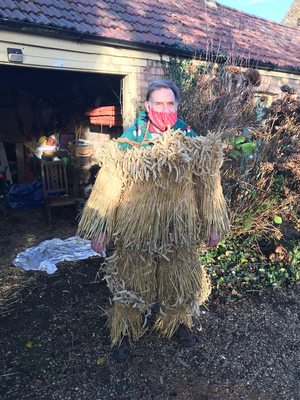 Paul Cornell was the Isolation Bear: (photo by Ady Bull)

It was a trip down memory lane for many, and there were lots of fond reminiscences in the YouTube chat as they recalled past visits and spotted friends now departed in the archive footage. We were delighted to have it re-affirmed that Straw Bear means so much to so many people. It wasn’t quite like being there in person, but it was the most festival-like experience we could put on while staying at home – and it was definitely the warmest Straw Bear ever! And we are all very much looking forward to the time – whenever that may be – that the Straw Bear can once again dance through the streets of Whittlesea.

Straw Bear Online took place on 15-17 January 2021. Most of the videos are still online, and can be accessed via www.strawbear.org.uk