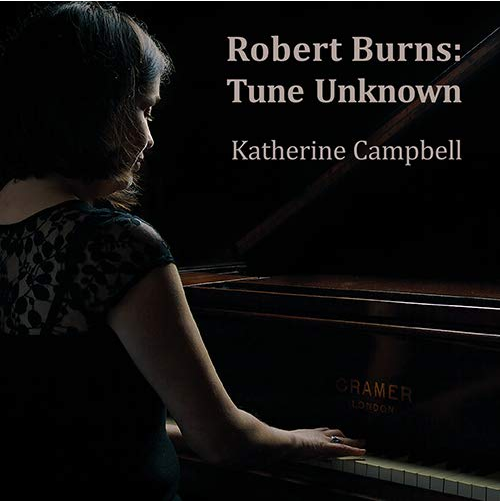 Many of the poems of Robert Burns are obviously written with a tune in mind, usually a traditional tune, and many Scottish artists, such as Dougie Maclean, Dick Gaughan and Nigel Denver, have recorded familiar Burns songs. Katherine Campbell, who comes from a family of traditional musicians, is well steeped in the tradition of Scots songs which she has brought to the study of Burns’ songs and poems (with Dr Emily Lyle of Edinburgh University – their work is being published in a book Robert Burns and the Discovery and Re-creation of Scottish Song).

Katherine has taken ten Burns poems which have been identified as being originally written as songs, but for which the melody has been lost, and composed new melodies with a piano accompaniment. This is the reversal of Burns’ usual practice of writing words to extant melodies apart from one known example of Burns composing an air ‘in the old Scotch style’ for the poem O, Raging Fortune’s Withering Blast. However, he was unable to write the tune down properly so it was never performed and the imperfect notation lost; Burns apparently was not unhappy about the loss, writing in his journal “….and perhaps ‘tis no great matter, but the following were the verses I composed to suit it.”

Here we have a set of songs with new settings, performed beautifully and with obvious affection by Katherine Campbell with quite an understated and sympathetic piano accompaniment. Most of these poems will probably be unfamiliar to someone who is not a Burns aficionado and it may take a little time for non-Scots to understand the dialect words (although there is a good glossary in the accompanying booklet). I enjoyed this album and Katherine’s lovely performances, but I think it is one to dip into, there are few contrasting tempos and I did occasionally find my concentration mind wavering. One for the Burns enthusiast I think.