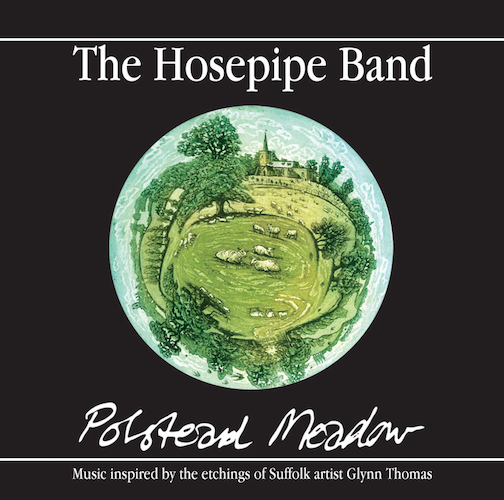 If you live in Suffolk or the surrounding area, you've probably seen the distinctive work of the artist Glynn Thomas, whose etchings have been displayed in galleries around East Anglia for many years. Although some of Glynn's work features images from other parts of Britain and beyond, many of his etchings are of well-known East Anglian scenes. A few years ago, I came up with a musical idea: The Hosepipe Band were looking for a subject for original compositions and a new recording, and it occurred to me that Glynn's etchings might be an ideal subject. I approached Glynn who seemed happy with idea and even produced a new image for us: Polstead Meadow, a round picture ideal for the label and from cover of a new Hosepipe Band CD.  We selected 8 of Glynn's Suffolk etchings and members of the band composed music to accompany them. We played our new music at the opening of an exhibition of Glynn's work at the John Russell Gallery in Ipswich and also, together with slides of his images, at Colchester Arts Centre and other venues in our area.

Glynn Thomas was born in Cambridge in 1946. He studied at the Cambridge School of Art specialising in illustration and printmaking For many years now, he has been a full-time professional artist living in Suffolk. You can see a full range of his etchings on his website at www.glynnthomas.com

Below are the texts and sound files which accompanied the seven etchings on the CD cover. Click in sound files to hear the music. 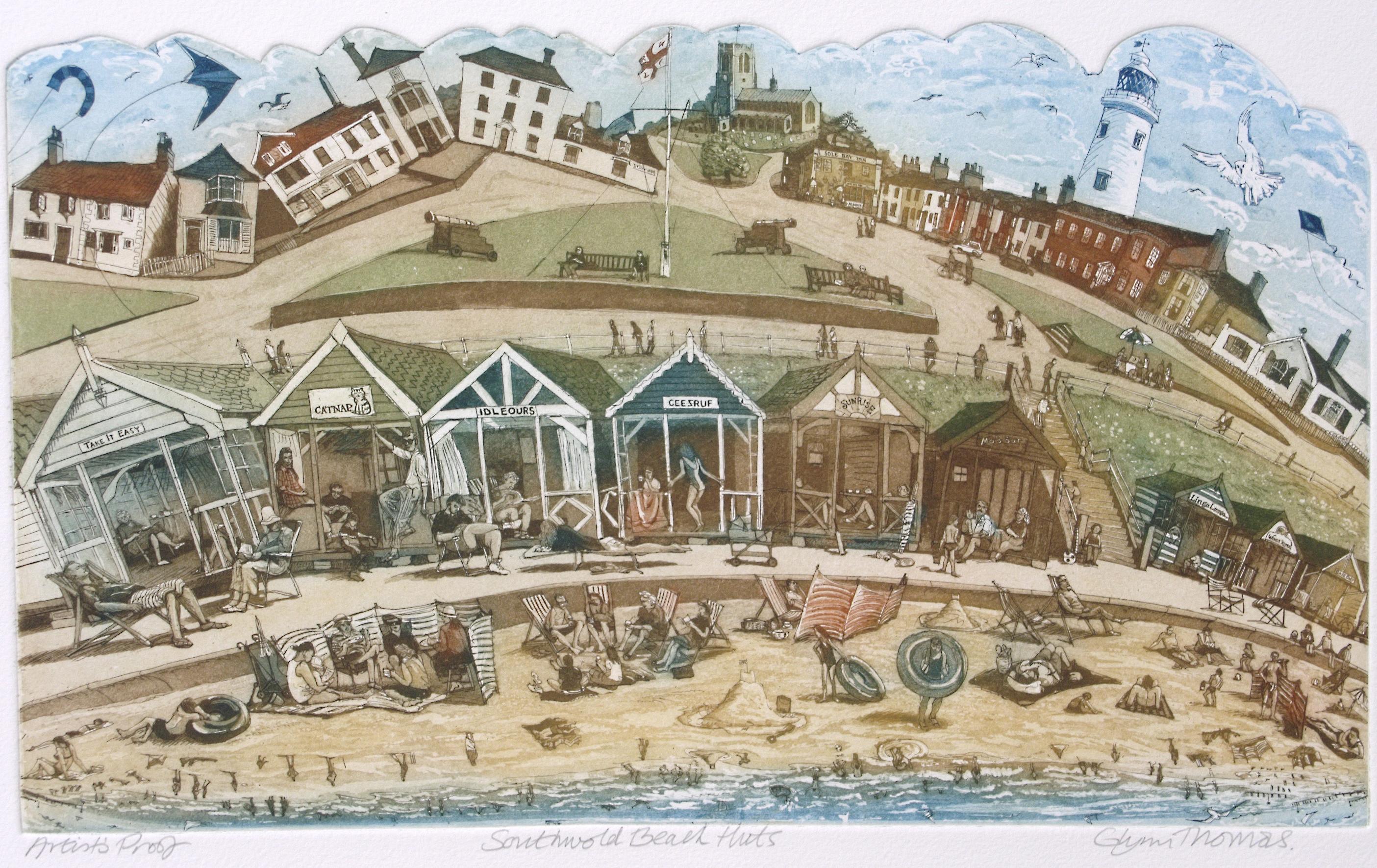 Take it Easy [Haines]
Southwold was an elegant resort in Victorian times. Still civilised and refined, it is now known for its colourful beach huts, its white lighthouse, its modern pier, and the Adnams Brewery which produces some of the best beers in the country. Glynn Thomas' 1998 etching Southwold Beach Huts, shows holiday-makers enjoying the beach in front of the huts, one of which is aptly named Take it Easy. The houses, the church and the lighthouse form a higgledy-piggeldy background to the huts. These are two tunes are higgledy-piggeldy jigs. 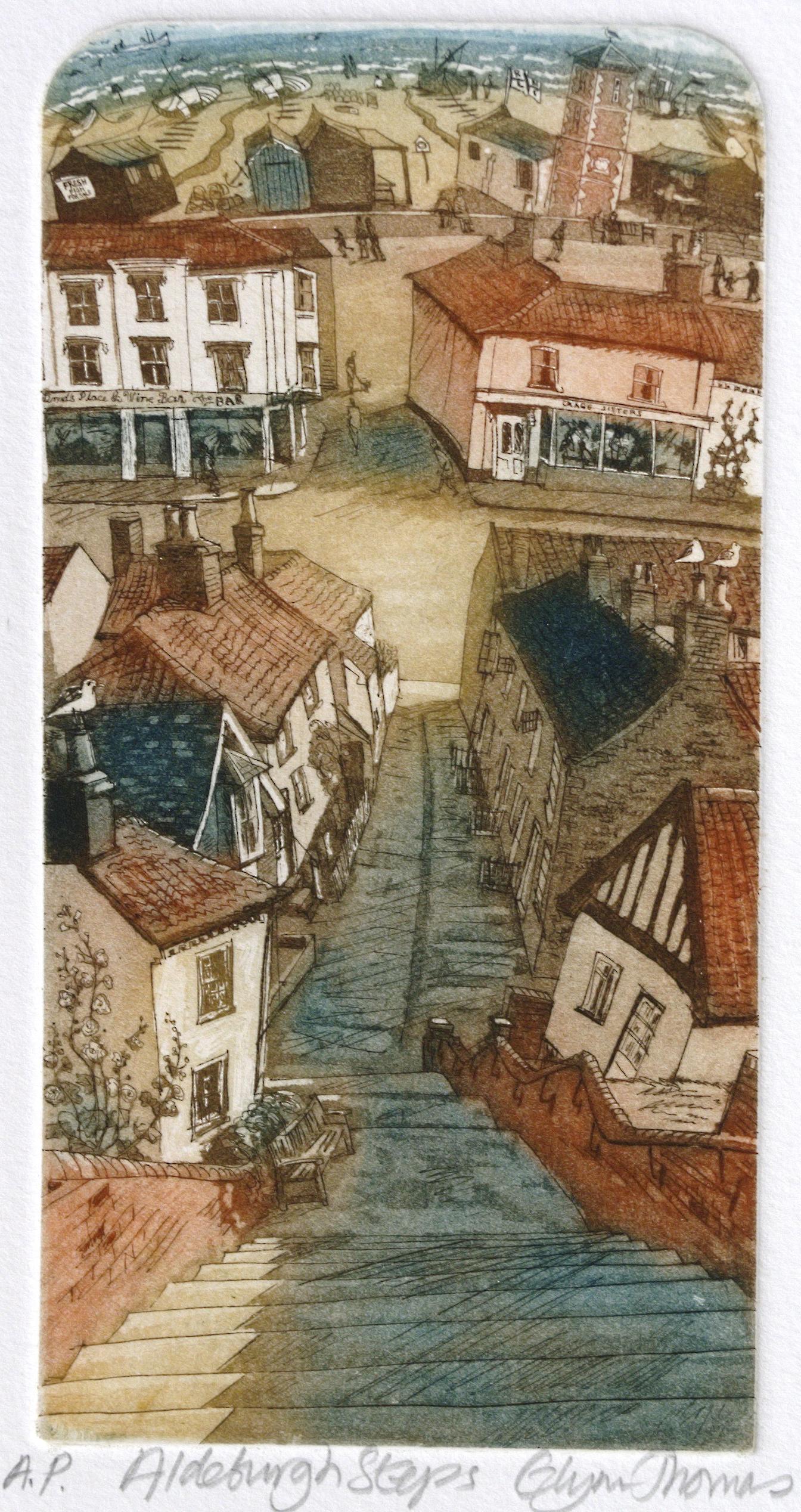 Aldeburgh Steps [Woollard / Coombs]
Picturesque Aldeburgh is probably best known for its association with the composer Benjamin Britton. The steps in Glynn Thomas' etching of the same name run down to the main street. Between the houses and shops you can see the pebbly beach with its fishing boats. As you listen to the music, imagine a cheery couple dancing down the steps and across the pebbles to the sea. The first tune, a regular mazurka, turns into the wilder rhythm of a 5/4 waltz. If there isn't already a country dance tune called The Aldeburgh Steps, it's time someone invented one.

Pin Mill [Woollard]
Now popular with yachtsmen, Pin Mill, on the south bank of the river Orwell, was

once an important Thames barge centre. It was also the home of Bob Roberts, skipper of the last working barge. Bob wrote about his life as a bargee, but is also remembered as a traditional singer and musician who performed regularly at folk clubs and festivals in the 1960s. As a sailor and melodeon player, he would have been familiar with hornpipe tunes like this 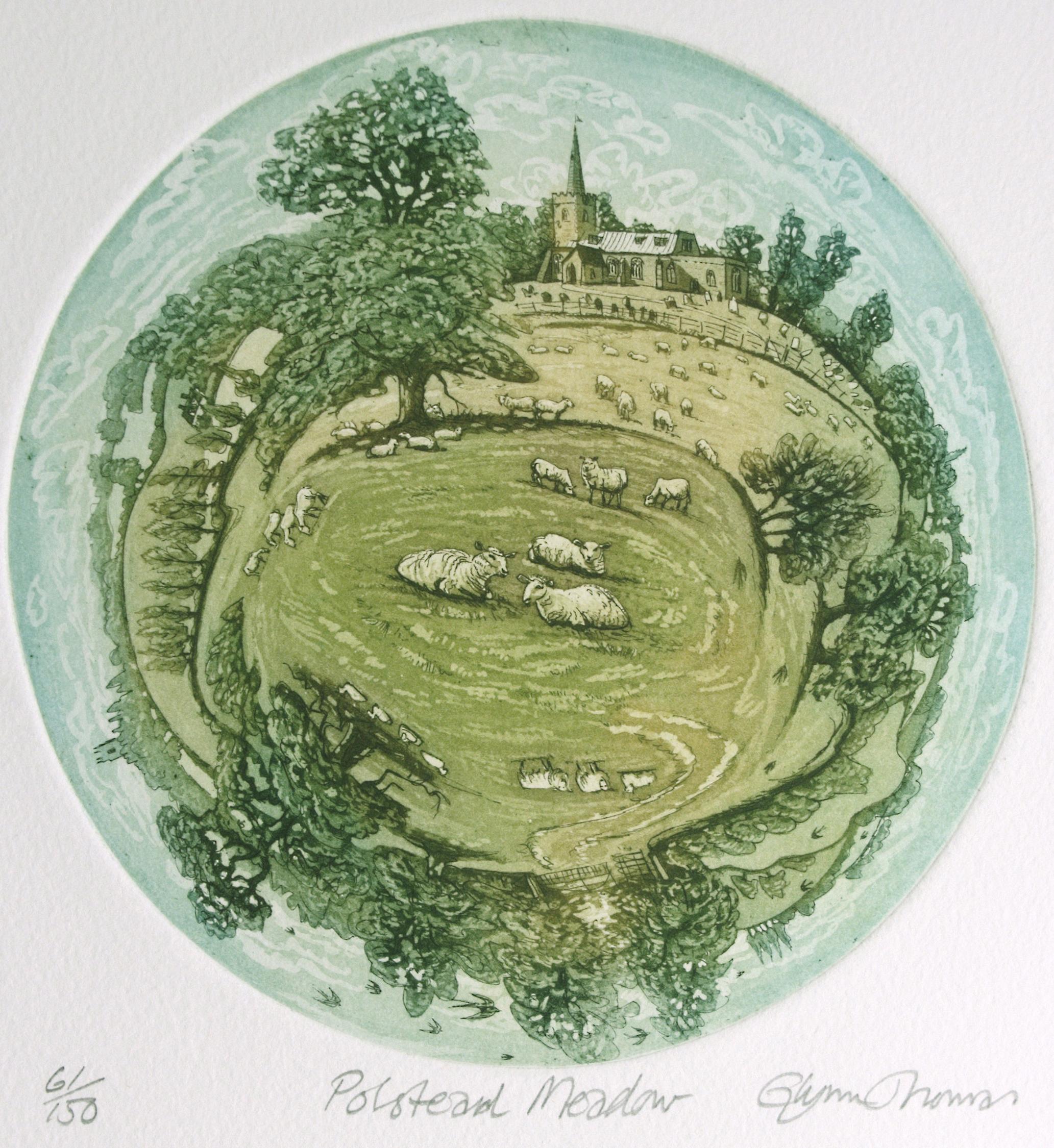 Polstead Meadow [Woollard]
These two gentle waltzes evoke the atmosphere of a peaceful afternoon in the village of Polstead on the Essex-Suffolk border. Today, the village is known for its duck-pond, its meadows and its cherries: Polstead Blacks. But, in 1827, The Red Barn in Polstead became notorious nationally as the place where Maria Martin was murdered by her lover William Corder. The murder and Corder's execution were sensationalised by the media of the day and the story featured widely in songs and folk tales.

The Ferryman [Haines / Woollard]
It takes the ferry just a few minutes to cross the river Blyth from Walberswick to Southwold, saving a half-hour car journey. But forget high-speed cross-channel catamarans, this ferry is a rowing boat which carries a few people across at a time. These two lively polka tunes seem to suit the bustling activity of present-day Walberswick. You can imagine children skipping across the dunes as they make for the little bridge where they will spend a summer's days crabbing. 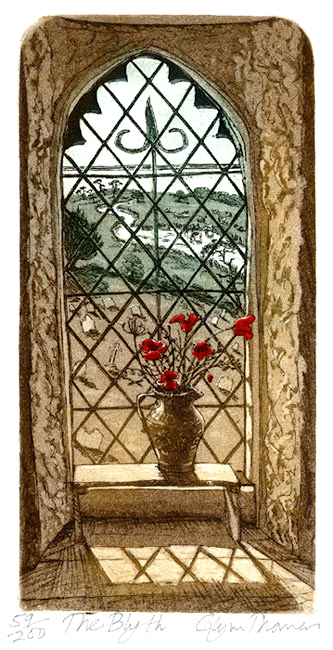 The Blyth [Coombs]
East Anglian cornfields speckled with bright red poppies invite relaxing summer picnics. But the poppy has other, grimmer associations: the scourges of warfare and drug addiction. Glynn Thomas' poppy, framed in a church window overlooking a graveyard and a rural river scene, evokes these conflicting themes. This plaintive melody reflects the ambiguous mood of the etching. 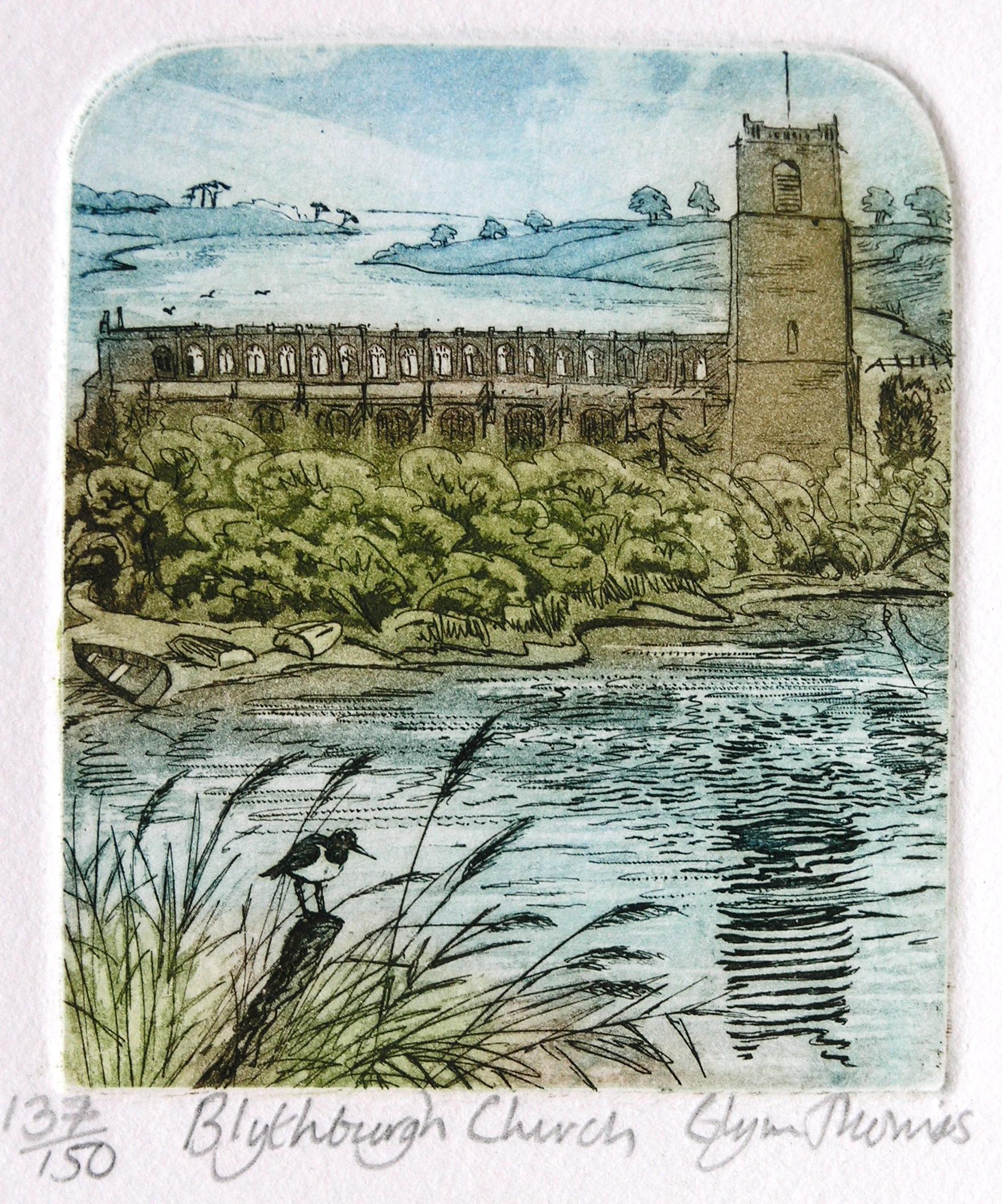 At night Blythburgh Church is a bright tower visible for miles around. Blythburgh itself was once a prosperous fishing port at the head of the Blyth estuary. In the fifteenth century, however, the river silted up leaving behind reed beds that now seem to surround the church. The music, which combines the sounds of the hurdy gurdy and the bagpipes, reflects the eerie atmosphere of this "Cathedral of the Marshes".