The lady in the third row…

The lady in the third row had noticed something on the wall, just above her head. It must have been quite interesting because she gazed at it for the best part of a song. Then she shifted her attention to the ceiling. Soon afterwards, something on the floor seemed to have attracted her attention.
Only very rarely did her restless eyes settle on the stage where I was playing a set, and those fleeting moments were probably the worst. The expression on her face as I sang was too intense to be described as bored, too filled with feeling to be merely resentful. 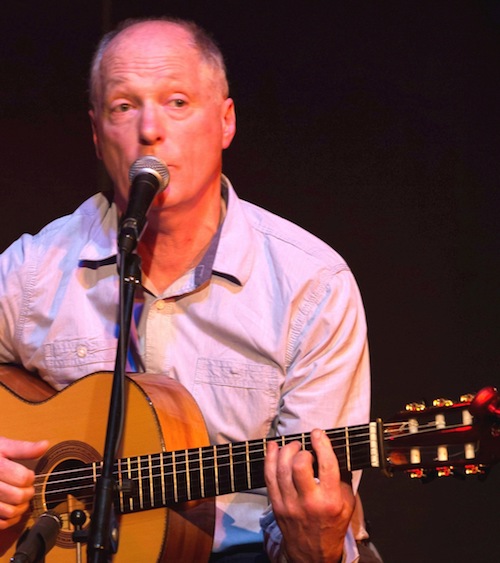 She really, really hated me. The way I looked. The way I sounded. My words. My pathetic jokes. My absurd attempts at melody. There was nothing that was happening on stage that she didn't absolutely loathe. If I had stopped mid-song and toppled over with a massive heart attack, I swear she would have stood up and punched the air with relief.

The professional, grown-up response to an undelighted listener is to ignore her, and play to the rest of the audience.

I am not that grown-up professional.

I played for the lady in the third row. I courted her with the eagerness of a young troubadour trying to win the heart of a beautiful maiden with his songs. And the harder I tried, the more infuriated the lady in the third row looked.
She won, of course. To sing words and music which you have written to a person who is unable to disguise her revulsion is a sort of personal torture. It is not just your songs that, with every note and syllable, are making her wish she was somewhere else; it is you. She has seen into your soul, and is recoiling.

This experience at a recent gig haunted me for a couple of days. I found myself wondering why an hour-long show for which the woman had paid no more than a fiver or so could cause such an impassioned loathing? And what had she expected when she had booked to see me? Stephen Fry? Bob Dylan?
I got a song out of it, of course. It will probably never be performed, self-pity being an unattractive look on stage, but it had one or two lines which made me feel slightly better at the time.

Oh lady in the third row
I'm about to crack,
I wish I understood what I've done wrong.
If only I could borrow
From Roberta Flack
I'd like to kill you softly with my song.

It was odd, after a show that had otherwise gone well, for me to be so preoccupied by the reaction of a single member in an audience (actually two - her husband was fast asleep beside her). I am used to criticism. Having spent most of my professional life writing books and articles, I have grown a fairly thick skin. A bad review is better than no review. The slavering hounds of the message-boards baying for your blood beneath an online opinion piece are at least confirming that they have read your article.
By the time a book is published, it has gone. Even as you read an extract at a festival, you know that you are already on a new, better book. What you are reading is the past. Once the words are actually printed on a page to be read by strangers, they are to you, in a certain sense, dead.
Songs are different. Singing them in public, one experiences their success or failure at first hand. It is what makes song-writing so interesting, uplifting and, occasionally, humiliating; performance is part of the creative process. Some songs can feel borderline as you write them, but acquire a new and unexpected life when you sing them in public. Others, which seem close to musical perfection at home, dwindle miserably on exposure.
As a result, singing your own songs can be a raw and unpredictable experience. Unlike writing a novel, which is an entirely solitary and lonely business, they are largely a co-operative venture. The audience plays its part. A song can and will change. It has not arrived at its destination until it has been performed several times  -   and maybe not even then.
I have no doubt that, in the future, there will be more ladies - and gentlemen - in the third row. As long as they are outnumbered by people who enjoy what they are hearing, I'll learn to accept them as part of the game.
'You come to realize that you can't please everybody,' the Australian novelist David Malouf once said. 'If a book is passionate and peculiar, as a book ought to be, it will put some people off for exactly the same reasons that other people will love it.' Or, as the equally wise Ricky Nelson once sang:
'It's all right now, I've learned my lesson well,
You can't please everybody, so you got to please yourself.'

Terence Blacker
Terence Blacker's new CD Enough About Me is available from Bandcamp, CD Baby, and from his website www.terenceblacker.com.