Everyone had a cassette of my Hank Williams Forty Greatest Hits LP and one of a similar Al Bowly double LP. Our song repertoire started getting English country influenced. We all liked Al Bowly, but we loved Hank. Mick was inspired by the great improvising fiddlers Hank had in his band and we all sang. Pete said to me one day, ‘You know who the best singer in the band is?’ I asked him who. ‘Mick,’ he said. As he said it, I knew he was right. We did folk clubs as the Footloose Family and Mick sang Carter Family songs and we all sang Hank, mostly in English accents. Mick was a fine, natural singer, with a warm, engaging voice, but always nervous about singing and about forgetting words. We realised he was the best of us. I now think that realisation was both surprising, as he was so diffident, while remaining absolutely true.

Later on still, in the Foot band, I switched to guitar and Mick and I worked closely on songs. His St George song was excellent and his setting of the old poem Under the Holly Bough was the best song on our album Foot Rules. I loved his fiddle playing and his instrumentals, like Space Doubt, were memorable and haunting. It seemed natural for us to break out as a duo, which we did in the 90s, as Two Left Feet. We did pubs in Colchester and the occasional folk club gig. Mick and Sarah and Pennie Harris and myself had formed The New Sneakers also and again Mick was the unassuming star. His lovely solo on my Easy Love was always a treat. In the duo, later, he had a wonderful solo fiddle accompaniment to John Fogerty’s Mr Greed. I added some guitar, but it hardly needed it. Mick’s singing of Eric Idle’s Universe Song and Leon Redbone’s I Want to Be Seduced were big hits with our audiences. I liked writing for Mick and he did a great vocal and helped me re-title a song called The Right to Live, about employment. 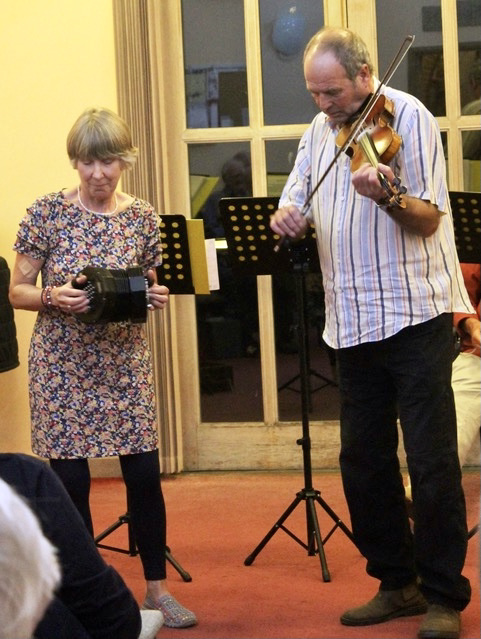 Mick and SarahMick was also an excellent recording engineer and again we worked closely on many recordings. When my brother, the drummer Jonathan May, was getting married, we recorded a version I had arranged of the Copper Family’s The Wedding Song. Mick said that I sang it well, when I asked him to sing it. So I had to bully him into singing it, but everyone who has heard it, including live at the wedding reception, said it was a lovely vocal performance. I’m so glad I still have the recording. Listen to Mick singing The Wedding Song below.Mick did talk about doing a solo album at one time and I was flattered that he wanted to include my song I Like Being Dull, but alas this never happened. We always used to say, after a mix, ‘That was alright, wunnit?’ to each other and we discussed choosing the Tandy Electronics Catalogue as our desert island book choice.

Some of Mick’s tunes were based on Essex speech rhythms, translated musically, which then suggested melody. This worked brilliantly on, for example, Right Out The Window. This project might also have become an album. Mick’s playing never cease to be brilliant, as can be heard on the Metric Foot Band Albums and on his work with Sarah, now easily found on the internet. Is there a solo album to be compiled? One day, I hope. I had not seen so much of Mick in recent years but I always missed him like a brother. The last time I saw him was a couple of years’ back, when the New Sneakers, plus Elaine Barker, went to lunch in Goldhanger. When we parted, we had a hug, I’m happy to report.

As with Pete’s insight all those years ago, Mick was the best of us in so many ways. He was the epitome of the diffident but brilliant folk person. Everyone loved Mick: he was lovely and hugely talented. I miss him painfully but I’m happy I knew, at first hand and with lots of fun and music, how great he was. As we used to say, Mick, that was alright, wunnit?