The Beast from the East was back!  Russian snow!  Just the weather for a day of dance!  There is a saying in Suffolk that “there’s nothing between us and the Urals”.  For once local lore and the Met Office agreed: the sun was not to shine on Oxblood Molly’s 4th Day of Dance in Halesworth.

Our North West side (Haughley Hoofers) was in two minds about going, but the roads were OK and word of mouth had it that indoor venues were being sorted out.  In the end the idea of an itinerant day of dance was abandoned – who would be on the streets to watch on such a day?

The whole event was held in the Rifle Hall becoming something akin to a Morris Ale.  For those who have never attended an Ale: it’s a bonding party for Cotswold Morris sides who gather in some far flung hall in winter to consume vast amounts of beer and food and dance through every dance they know either until they drop or midnight.  Usually midnight comes first … though as Morris sides get older … 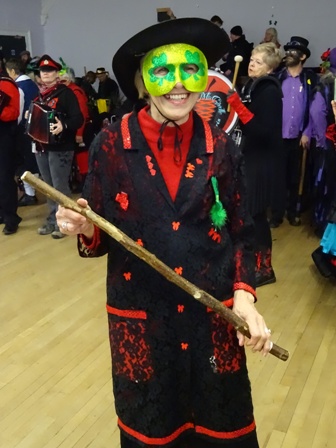 Anyway back to Halesworth: giving a St Patrick’s Day twist to their event with green face masks and shamrock, Oxblood started with massed dances arranged beforehand for every genre of dance represented.  But as we were the only ones, with the help of a sole Danegeld dancer, able to make up a complete North West side we were on our own – slightly nerve-racking as “Carr Lodge” is quite a new dance to us and we were by no means sure of it, but the sprung wooden floor lifted us all.  After the massed dances, it was turn and turn about.  Informality and lack of a public audience meant that those intrepid, but lone, souls representing their absent sides could join in.  (Quick run-through in the men’s cloakroom anyone?)  Between dances friends chatted and relationships between sides were renewed.

After learning a new dance on the hoof, Danegeld's Sandy had earned her cup of tea!

Because of the last-minute arrangements, there was no catering apart from hot drinks and some food would have been appreciated; the sip I had from someone’s hipflask containing a brew of vodka and Fisherman’s Friends which would have felled the most virulent flu germ didn’t really make up for it.  The lack of catering though provided a change of scene and some extra lunchtime business for the local chippy, Co-op and pub where there was a music session in full swing.

North West sides do not usually have this party-like experience.  This is because, unlike Cotswold dances which are broadly similar within each tradition, North West dances are all so different from each other and, as processional dances, the figures could be called in any order, so it’s rare that even if sides have a dance in common, they will do it the same way.  Everyone I’ve spoken to enjoyed the day, some more than a normal day of dance and Oxblood have had several messages of appreciation.  The smiles and some of the dancing are captured by photos and videos on https://www.facebook.com/halesworthdayofdance/ 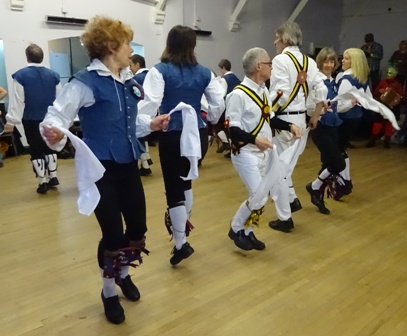 Although a few individuals represented other groups, just under half of the 24 full sides invited made it to Halesworth.  In a way this was a good thing as, if all those invited had come, the hall would have been too small.  As it was the arrangements worked well.  This day of dance has always been in mid-March and so far the weather has been all right, but perhaps it might be as well to think about either changing the date or else building on this year’s experience and arranging a different type of event.